The CD is a collection of Nana's famous funny commentaries and real phone calls including her hilarious call that sent Ellen DeGeneres into a sweet fit of uncontrolled laughter! 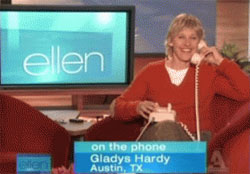 Gladys Hardy is hilarious, opinionated and unpredictable, but never mean-spirited. She also claims to be 88 and holding , born in Knoxville and married to Floyd. When the woman who said she was an Austin, TX, grandmother called in to the Ellen show early in 2007 during a viewer phone segment, her downhome humor made her an instant sensation. Subsequent phone calls have launched her as a homespun national favorite. Now Gladys Hardy, aka Nana, gives America a piece of her mind with commentaries on modern life and current events with her debut album, I Love Jesus But I Drink A Little.